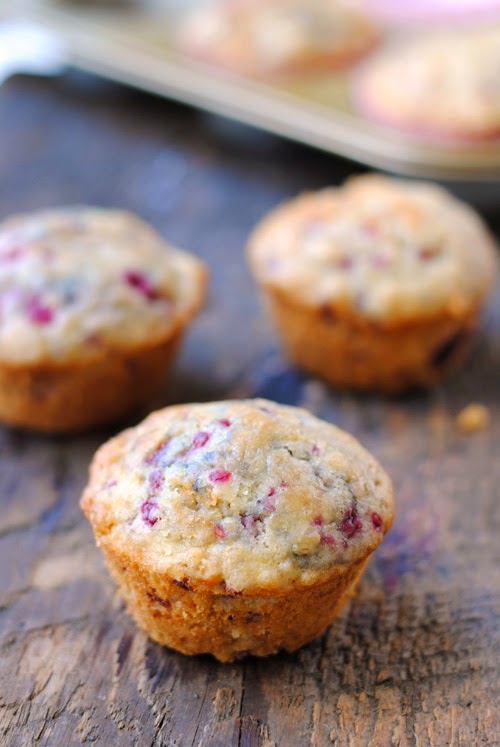 My boyfriend has a similar problem. Except instead of dead people he sees ingredients. And he is completely unable to shape those ingredients into anything that remotely resembles food for himself.

Before we started dating he was a complete McDonald's addict, and now -- thanks to me -- he eats at least one healthy meal a day. But if I'm not around to point out food to him? If there isn't something prepared, something that can be eaten as-is? Well, he really can't get his shit together and wanders around like a zombie moaning for a fresh kill.

"Eat a muffin," I told him the other night. But he grumbled and said it isn't meat and why don't we just have freshly prepared dinners on hand all the time? But he took a bite. And then another. And then proceeded to eat half the tray of them because they were (no surprise) really, really good.

So the next time you need to feed your hungry hoards, try these Lemon Raspberry Muffins. They're easy, quick, and can be popped in the freezer. Everyone wins!

Directions
Preheat oven to 375F and grease or line a muffin tray.

In a large bowl, combine the eggs, lemon juice and zest, oil, milk, sugar, and vanilla. Whisk together until well blended.

In a small bowl, mix together the oats, flour, baking soda, and salt. Add to the dry ingredients and mix until just combined. Fold in the raspberries. Spoon the mixture into the muffin tray and bake for 15-20 minutes -- until golden brown and a toothpick inserted in the middle comes out clean.

Allow to cool for a few moments before removing from the tray and eating or storing.
Posted by Leanne at 2:19 PM