Frogs in a Bog Cupcakes

This will be the only time it's okay to have a fly in your food. 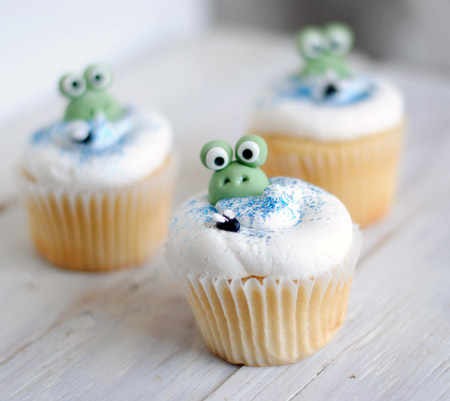 These frog cupcakes were part of a wedding order I filled this week, and possibly one of my favourite cupcake designs for quite some time. The frogs are just so cute and kind of dumb looking - they melt my heart. 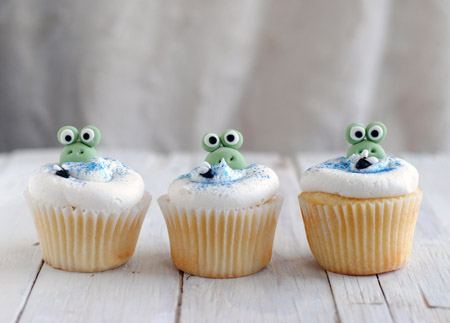 I based them off of a few designs I saw floating around, but opted for white icing (food colouring squicks me out) with some bright blue sparkles for the water. 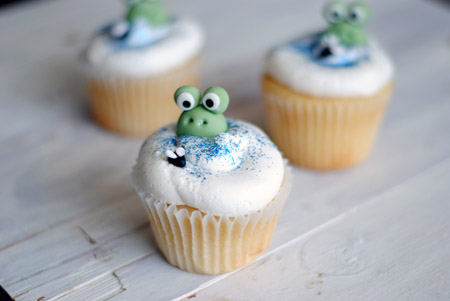 Want to see more adorable cupcakes or have a sneak peek at what's going on behind the blog? Join me on Instagram!

Frogs in a Bog Cupcakes

You'll need
Vanilla cupcakes
Buttercream frosting
1 package of gumpaste (depending on how many you're making, you probably won't need the whole thing)
Green food colouring
Black food colouring (if you can purchase pre-dyed black gumpaste, please do!
Blue edible glitter (can be picked up at most cake supply stores)
Black food writer pen
Tweezers (trust me)
Something to glue the gumpaste on: either egg white, water, or gumpaste glue

Directions
Begin by dying your gumpaste. Take a large chunk of gumpaste, enough for one round inch per frog head and extra for eyes, and dye it green. Work the food colouring into the gumpaste extremely well so there are no streaks. Repeat with a small amount for black, and set aside some white, too. Cover with plastic wrap so it doesn't dry out while you're working on the different steps.

To make the frog heads, roll one round inch of green gumpaste into a ball. Flatten slightly and gently pinch one end so it will be slightly more narrow where the eyes will be placed. Poke two holes on the flattened side for nostrils. Repeat until you have enough frog heads.

Roll out two small green balls for the eyes, and flatten them slightly. Attach these to the top of the frog heads, using water or egg white.

Roll out and cut small white gumpaste circles to attach to the green eyes, and dot with the black food writer to create adorable frog eyes.

To make the flies, roll out tiny (about 1 cm) long balls of black gumpaste. Smooth into an oval shape. Roll out white gumpaste into a thin strip, and cut into wing shapes (thinks triangles). Using the tweezers, attach the wings to to the black ovals. Voila! Flies.

Ice the cupcakes, and sprinkle a small amount of blue glitter on top. Place the frog into the icing, so he's peeking out, and, using the tweezers, place the fly in front of him.