This is the first post in a series highlighting classic Canadian dishes. Yes, they do exist. 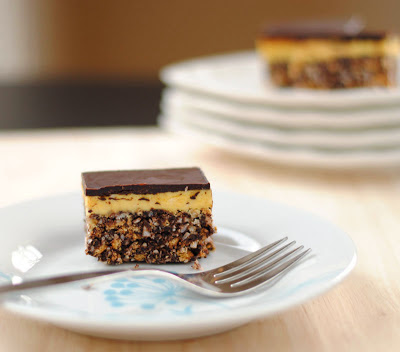 Nanaimo Bars are, perhaps, Canada’s most famous dessert. The legend goes that they originated in Ladysmith on Vancouver Island (which, while not Nanaimo, is very close). Mabel Jenkens submitted the recipe to a bake sale, and the bars rapidly gained notoriety from there.

Nanaimo Bars are recognizable for their chocolate, coconut, and walnut base, custardy buttercream filling, and chocolate topping. I miss them very much now that I’m deathy allergic to coconut and nuts. So it goes. 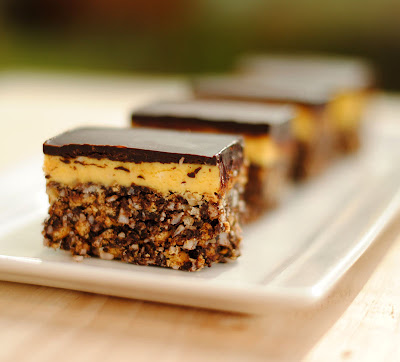 But our family obsession with Nanaimo Bars reaches much further than the Island where they originated, and the country where they became popular.

In a time before the Internet, digital recipe collections, and the easy jet-set traveling we’re used to today, my mom packed a book with her favourite recipes and set off halfway across the world. In 1972, her travels took her to a city in New Zealand called Timaru, where she entered one of her go-to recipes from back home into a radio contest. 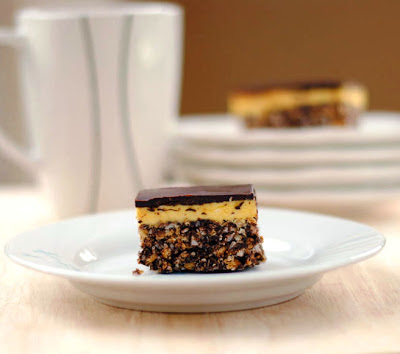 The bake-free bars became a huge hit and quickly spread over the town and beyond. My mom now thanks herself for bringing Nanaimo Bars down under, where you can still find them today.

I've seen a lot of misleading recipes for Nanaimo Bars around (ahem, SAVEUR), but this one is the real deal. Trust.

Want to try your hand at this Canadian Kitchen classic? The recipe is below, and if you send me a picture of your Nanaimo Bars, I’ll post it on my blog!

In a saucepan over medium heat, melt the first 3 ingredients. Add egg and vanilla and stir to cook and thicken. Remove from heat. Stir in crumbs, coconut, and nuts. Press firmly into an ungreased 8" x 8" pan.

Cream ingredients until smooth and light. Spread over bottom layer.

Melt chocolate and butter over low heat. Cool. Once cool, but still liquid, pour over second layer and chill in refrigerator.