It's safe to say that we discovered a new favourite treat this week. 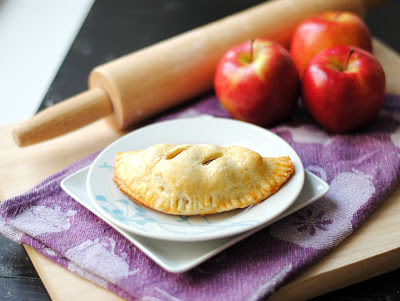 Completely addictive, these pies were gone by dinner, mere hours after I made them. The buttery crust contains no shortening, and the apple filling slightly caramelized with a hint of spice. My only regret is not making a double batch. I'm looking forward to trying again with different fillings, too. (I've got my eyes on you, blueberries...)

But you probably didn't come here for pie, because I have a giveaway for you! 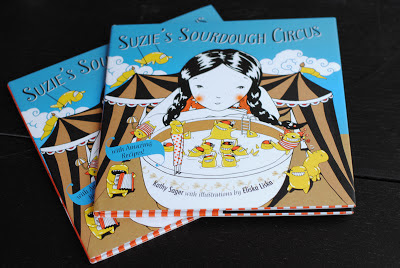 Starting today and ending next week, I'm giving away TWO copies of Suzie's Sourdough Circus. A perfect holiday present for the bread fan or little one in your life, Suzie's Sourdough Circus follows a young girl whose wild imagination takes us into the crazy world of sourdough starter. I'll let Kathy Sagar, the author, break it down for you:

In rhyming prose, sure to appeal to both children and their grown-up sous-chefs, this story is both informative and fun. Young readers spend a snowy northern afternoon in the warm kitchen with little Suzie, her dad and their zany sourdough circus, learning a simple method to bake wholesome and tangy sourdough bread.

Kids will be asking their parents for their very own sourdough starters once they see Eliska Liska's bright and playful sourdough creatures cavort, frolic, sing and dance, blow bubbles and get up to all kinds of trouble in order to make the bread rise.

Amazing illustrations and recipes are in the book, too. Want to learn more? Check out Kathy's website! She also has a worldwide Sourdough Share going on, where you can sign up to give and receive some sourdough starter.

Here's how to enter. You get one entry per item:

1. Leave a comment telling me your favourite way to cook with sourdough. Bread? Biscuits? Something totally awesome I've never heard of? Spill! Be sure to heave a way I can contact you.

2. Become a fan of Leanne Bakes on Facebook, and leave me a comment to let me know (or leave a comment if you're already a fan!).

Good luck! The winner will be drawn on December 5th.

Make the pastry: Mix the flour and salt together in a large bowl. Cut in the butter, and pinch with the fingers to make fine crumbs. Make a well in the middle.  Stir together egg and sugar, and pour into the well. Swiftly mix in with the fingertips until the mixture forms a dough.  Do not overmix. Divide into 2 disks, wrap in plastic, and chill in fridge for at least an hour.

Make the filling: Mix together the apples, sugar and spices. (Try not to eat it all!)

Roll out pie crust until 1/4 to 1/6th of an inch or so thick. Use a large cookie cutter, or cut around the rim of a bowl, to cut out the pie shapes.

Place cut-out dough on cookie sheet, and spoon 1 - 2 tbsp of filling in the middle, then fold in half. Press together the edges with fork, using egg white when needed to help it stick.

Brush tops with the egg and bake for 25-35 minutes, until golden brown. (Watch carefully!)