These brownies are a nearly excessive combination of everything good in life. Chocolate, marshmallows, graham crackers, more chocolate-- all inspired by one of my favourite childhood treats. 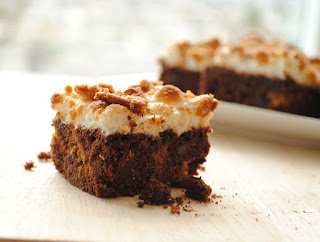 2012 had a bit of a rough start. My little boy was bit by a dog on New Year's Day, and we spent several hours in the ER getting his face stitched up. The good news is he's healing well, was a champ during the hospital visit, and generally really good spirited about the whole thing. The bad news is he's been having nightmares, and has been on edge all week. Some of the best ways we've found to combat the post-bite blues include snuggles, movies, polysporin, and baking some awesome treats together. 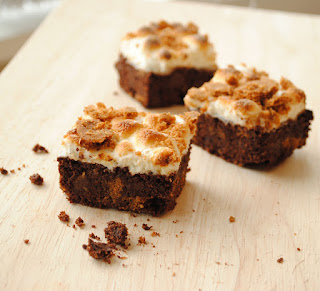 Although he says I didn't quite add enough marshmallows, these bars went a long way making us both feel better.

When brownies are slightly cool, coat evenly with marshmallows. Place in oven with broiler on, and broil until lightly toasted. Remove from oven and sprinkle with graham cracker bits.