These donuts. They're something else. And actually kind of healthy... (for a donut). 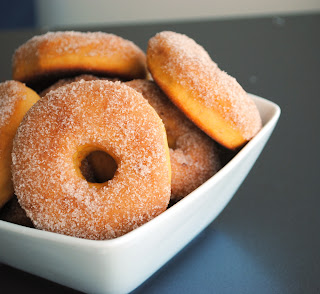 Health is rarely a selling point with me when it comes to dessert, especially donuts. But with just a few tablespoons of butter, two sweet potatoes, and no deep frying? And they still taste amazing? Please. You can't beat this. I pitched the idea of sharing one for breakfast with the boy, and his 4 year old brain couldn't handle it. "But Mom," he said, "they're not THAT healthy. They're covered in sugar! Let's have Cheerios with blueberries instead. That's a much healthier breakfast, and we'll feel better if we eat it." Fine, kid. But I'm very disappointed. 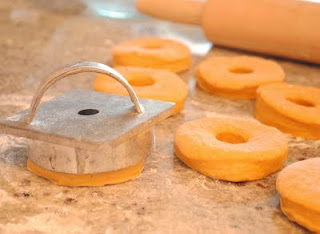 And now, if you excuse me, I have some Queen to listen to. Happy birthday, Freddie!
Cinnamon Sugar Tossed Sweet Potato Donuts
adapted from Fifteen Spatulas

Ingredients:
1 cup mashed sweet potato total (I used 2 medium-sized potatoes)
3 tbsp unsalted butter
½ cup milk (I used whole)
2¼ tsp instant dry yeast
½ cup granulated sugar
½ cup packed light brown sugar
1¼ tsp sea salt
¼ tsp ground nutmeg
1 tbsp vanilla
1 extra large egg
2 extra large egg yolks
3.5 cups bread flour, plus more for rolling
Cinnamon Sugar Coating:
1 cup sugar
1 tsp cinnamon
4 tbsp unsalted butter, melted
Directions:
Prick the sweet potato several times with a fork and microwave for 8 minutes, until tender.  Cut the potato in half and scoop the flesh out.  It will be hot. Be careful. Mash it up with a fork.
Melt the butter, and let it cool.
In the microwave (or a saucepan if you’re fancy) heat the milk to just below 105F. Any higher will kill your yeast dead.
In the bowl of a stand mixer fitted with the whisk attachment, let the yeast and warm milk sit for 5 minutes until foamy.  Add the sugar, brown sugar, salt, vanilla, nutmeg, and whisk to combine.  Add the mashed sweet potato, butter, egg and egg yolks, and beat until well combined.
Change to the dough hook, and add the flour.  Mix at medium for 2 minutes, then bump the speed up to medium high and knead until a soft dough forms and the sweet potato dough pulls away from the sides and toward the centre, about 5-7 minutes.  If it doesn’t pull together, add a little bit more flour.
Dump the dough out, form it into a ball, and let it rise on the countertop for 2 hours (don’t be alarmed if it doesn’t rise all that much… it won’t).
Gently redistribute the yeast by kneading lightly, and then roll the dough out onto a lightly floured surface.  ¾ of an inch works. (Or 1.5cm if you’re Canadian like me!)
Using a circle cutter, gently cut out circles and poke the middles to make holes. If you have a donut cutter like I did, even better! It will do the annoying hole part for you. Place the doughnuts on two parchment paper lined sheet pans, and let them rise for 2 hours, covered with plastic wrap.
Preheat the oven to 400 degrees F.   Bake the doughnuts in the centre of the oven for about 10 minutes, until ther have risen and are golden brown (they should be 200 degrees F on an instant read thermometer).
While the doughnuts are baking, make the cinnamon sugar topping by melting the butter in one bowl, and whisking the sugar and cinnamon in another.  While the doughnuts are hot out of the oven, toss them in the butter, then immediately toss in the cinnamon sugar.
Posted by Leanne at 12:42 PM