Oat Fudge Bars are one of my guiltiest pleasures. 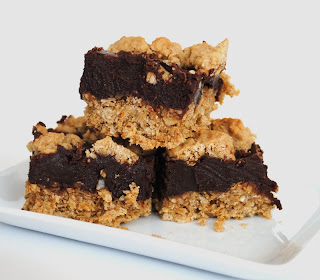 When I worked at Starbucks, a lot of oat fudge bars would accidentally touch the counter, or my hand, or my mouth, when I was getting them for a customer, making them unsellable and fair game for me to eat. They were also one of the only items I wasn't allergic to, and somehow this helped to justify my deliberate clumsiness. (Along with my countless other moral shortcomings).

Like fudge, they're one of the items I hesitate to make and keep at home. As my coworkers witnessed with a box of donuts last week, when my willpower breaks, it isn't pretty. But the other day I was being set up on a blind date, and figured if it really sucked, at very least I could come home to a tray of my beloved oat fudge bars. 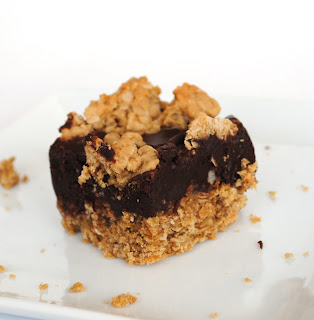 They're so amazing with a maple latte, too. Actually, they'd probably be good with maple mixed into the the oat layer. My weekend project, perhaps?
Read more »
Posted by Leanne at 11:17 PM

Of course these Country Applesauce Muffins are a Williams Sonoma recipe. 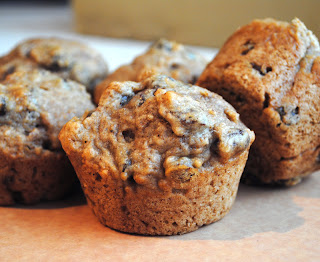 I've been hesitating to post these. I feel like I've posted too many muffins lately, failing to balance it out with more exciting things. Plus this is my 100th entry (!), and it feels kind of anticlimactic-- like I should have made a cake, or at very least something without whole wheat flour. (Saving that for my blogiversary in a couple of weeks!). But today I was at work, eating some random unappealing freezer muffin I found, and realized I couldn't hold these back anymore. Unlike the random freezer muffin, these ones are healthy and tasty. They're also a great way to use up the applesauce the boy always asks me to buy, but never wants to eat. 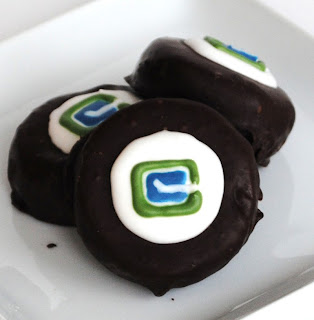 I'll be the first to confess how little I know or really care about sports. I think it stems from my rather uncompetitive nature. When I was young, at my brother's hockey games on cold weekend mornings, I spent my time playing with the other sisters or reading, rather than soaking in the game. And when his team occasionally lost, I'd just shrug and think "Well, the other team gets to win! So that's pretty nice for them".

But I do get dessert. And feeling some sort of loyalty to hockey is unavoidable here. This is why, sometimes, I merge the two together. In the early days of this blog, I made Canucks cookies and showcased a Canucks cake I made eons ago. I usually go with this logo because it's cuter and easier than the other ones. 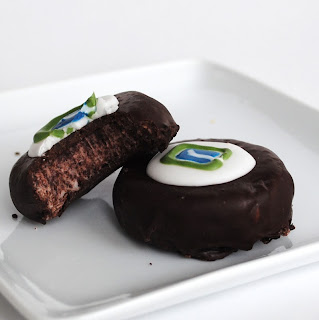 If you don't know what cake bites and cake pops are by now, well, I hope the rock you live under is warm. They're these wonderful little balls of mushed up icing and cake, made into an endlessly clever array of shapes. I attempted them a few years ago in what ended up being a huge disaster. Then I found out I was allergic to candy melts (palm oil-- they put that shit in everything), and pretty much ruled them out altogether. This past Christmas my mom gave me Bakerella's Cake Pop book, and I came around a little bit. 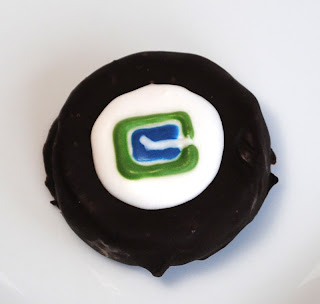 These cake bites are about 1.5 inches wide, and are made with homemade chocolate cake and buttercream icing, and coated in real semi-sweet chocolate. The taste shows the quality of the ingredients, and the little pucks are just like creamy truffles. The logo is only about 1 centimetre long, so the little stick was drawn, painstakingly, with a toothpick.

There's a pun in here about me really scoring with these, but I'll leave well enough alone. Feel free to pun it up in the comments. 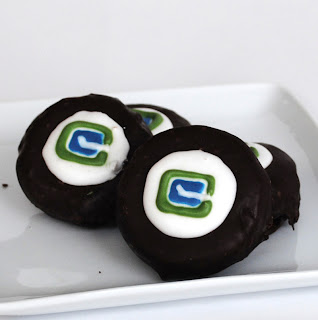 Email ThisBlogThis!Share to TwitterShare to FacebookShare to Pinterest
Labels: buttercream, cake, chocolate, decorating, every tag EVER, icing, not knowing my limit nor baking within it, strangely awesome

This little guy is hiding a surprise... 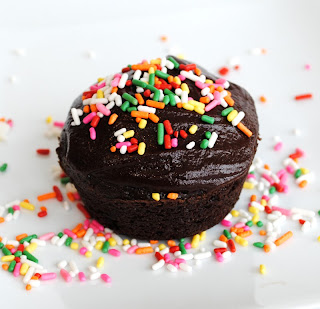 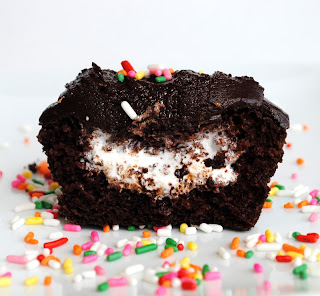 A while ago I picked up some marshmallow creme from the grocery store, thinking for whatever reason that I had a recipe I wanted to use with it. Once home and searching through my bookmarks I realized I was wrong. And now had a tub of weird globby marshmallow glue to find a way to use up. Eating it on a spoon dipped in chocolate sauce placated me for a few weeks, but I was left wanting. Plus apparently this stuff expires (how?! It's not even real food!), so I needed to use it up soon.

Today I took a sick day from work after hacking uncontrollably and generally being a disgusting mess/spreading my germs around the office for a few hours. Since I'm allergic to sleep, baking is what makes me feel better and helps me relax. 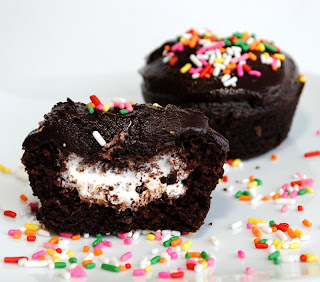 I decided to make these vegan chocolate cupcakes, with a marshmallow creme filling, and chocolate glaze. My friend Asia requested I have more lactose-intolerant/dairy-allergy friendly recipes, so this one is for her! The glaze is easily adapted to be made with margarine or shortening. The cake is an old family recipe, and so easy to make. There are a lot of similar recipes around, but trust-- this one is best.

My William's Sonoma Baking Book has done it again: these lemon poppyseed cupcakes muffins are light and flavourful. 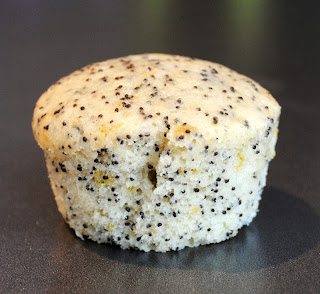 No. I'm not going to shut up about that book any time soon.  In fact, I'm waiting up right now, exhausted and sick, to watch this week's 30 Rock, and pawing through it, planning my next attack. There are at least 20 stickies. You've been warned.

These muffins are tasty and refreshing, but really, really toe the line between dessert and... not dessert. Despite the fact that I write a blog devoted to giving people, at the very least, visual diabetes, cupcakes masquerading as muffins kind of bother me. If I'm going to eat a cupcake, I want it to be full of fat and carbs and a thick layer of icing. If I'm going to eat a muffin, I want it to be able to act as some semblance of a meal, so I can get my real food quota out of the way for the day. 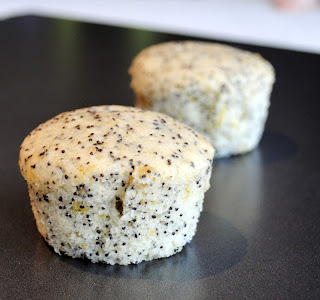 Bitching aside, these really are good. They'd be even better with a lemon curd filling. They remind me of something that would be at a bake sale, or maybe something an old lady would bring to church (I say that like I've been to a church) and then all the other old ladies would complain about getting the seeds in their teeth. Those little seeds can really suck, non?