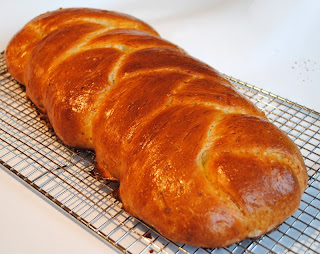 If there was a perk to my brief stint of post-degree unemployment, trying out new recipes from new cookbooks, especially William Sonoma's Baking Book, was it. It was, hands down, the most effective way to curb my near uncontrollable urges to sit around in my underwear eating bacon and kraft cheese singles inbetween sending out applications.

It was a good few weeks.

I had never made Challah before; any sort of bread always seems like too large a commitment for me. All the waiting and the rising and the shaping of the loaf. But if there's ever been something that's worth the effort, it's this. I'm (un)ashamed to say it lasted barely two days. Next time I think I'll make it into two smaller loaves, though, instead of one giant monster one.

It also makes the most indescribably amazing french toast I've ever had.

Because it's a hell of a lot to copy and paste, you can find the recipe over here!
Posted by Leanne at 4:28 PM