Summer is pretty much officially over here.  Both school and the rain have started, and the days are getting shorter.  But that doesn't mean saying goodbye to ice cream. 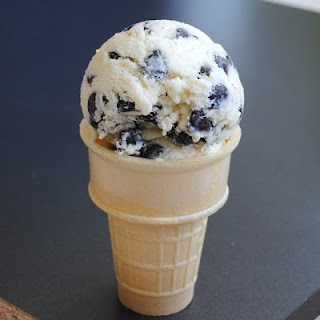 I had dreams of making mint chocolate brownie ice cream, but time was short and desperation was high, so chocolate chips it was.  Unlike when I made vanilla ice cream last time, I didn't use heavy cream in this batch.  It wasn't quite as creamy, but was still delicious.  No one complained. 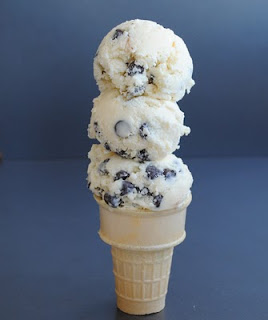 I'm on the search for some unique and yummy ice cream flavours to try out this fall, so if you have some please send them my way!
The recipe is much the same as the one I used for the mock reese peanut butter cup ice cream, but adapted to what I had in the fridge.
Mint Ice Cream
Adapted from Alton Brown
Place the half-and-half and the milk into a medium saucepan, over medium heat. Bring the mixture just to a simmer, stirring occasionally, and remove from the heat.
In a medium mixing bowl whisk the egg yolks until they lighten in color. Gradually add the sugar and whisk to combine. Temper the cream mixture into the eggs and sugar by gradually adding small amounts, until about a third of the cream mixture has been added. Pour in the remainder and return the entire mixture to the saucepan and place over low heat. Continue to cook, stirring frequently, until the mixture thickens slightly and coats the back of a spoon and reaches 170 to 175 degrees F. Pour the mixture into a container and allow to sit at room temperature for 30 minutes. Stir in the mint extract. Place the mixture into the refrigerator and once it is cool enough not to form condensation on the lid, cover and store for 4 to 8 hours or until the temperature reaches 40 degrees F or below.
Pour into an ice cream maker and process according to the manufacturer's directions. This should take approximately 25 to 35 minutes.
In the last few minutes, throw in chocolate chips and mix into ice cream.
Serve as is for soft serve or freeze for another 3 to 4 hours to allow the ice cream to harden.
Posted by Leanne at 10:56 PM