Mocha Whoopie Pies, or Top of the Cupcake TO YOU 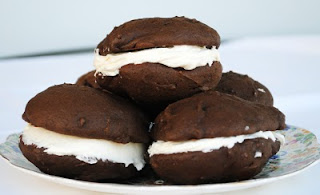 A lot of people are declaring that whoopie pies are the next cupcakes, but I'm not really feeling it.  For one, cupcakes have had a solid run, so can something really be the "next" cupcake?  That's like saying something is the next cake, or brownie.  Cupcakes have surpassed being just a trend, and are pretty much a mainstay in our dessert culture.  That aside, sure whoopie pies have an awesome novelty factor, but they're also more work (marginally) and aren't nearly as cute.  And people fucking love cute.  Whoopie pies can be downright homely sometimes.

Looks aside, they taste good.  Really good.  They're essentially icing sandwiched between two cupcake tops.  They actually remind me of the hamburger method of cupcake eating. 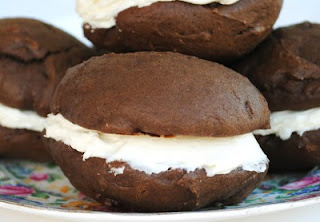 These little guys were made for my dad's birthday, which comes 8 days after my mom's.  My dad and I have similar taste in dessert so it wasn't that hard to come up with ideas for him.  I've made chocolate whoopie pies before, but wanted something a little bit different.  Mocha it was.  I used a vanilla buttercream filling instead of the ganache used in the recipe.  The vanilla is a lovely complement to the mocha cakes.

They're surprisingly filling, so leave lots of room or wear stretchy pants because you know you'll want to eat a few.

Position rack in the center of the oven and preheat the oven to 375 F. Line 2 baking sheets with parchment paper or silpats.

In a small bowl or cup, mix together the instant espresso powder and water and set aside.

Sift together the flour, cocoa, baking soda, and salt into a medium bowl.

In the work bowl of a stand mixer fitted with the paddle attachment, beat together the butter and brown sugar on low speed until just combined. Increase the speed to medium and beat until fluffy and smooth, about 3 minutes. Add the egg and vanilla and beat for another 2 minutes.

Using a spoon, drop about 1 tablespoon of batter onto the prepared baking sheets, spacing them at least 2 inches apart. Bake for about 10 minutes or until the cakes spring back when touched. Remove the baking sheets from the oven and let the cakes cool on the sheet for about 5 minutes before transferring them to a rack to cool completely.
Posted by Leanne at 10:15 AM