Who needs brownies when you have Snickerdoodle Blondies? 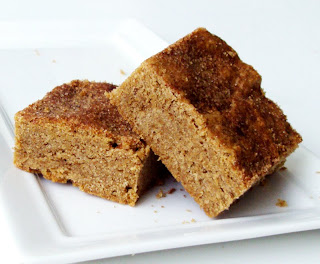 When I first started frequenting baking sites a few years ago, I was bombarded with recipes for Blondies.  I had no idea what the hell they were.  And since most contained coconut or tree nuts, I sort of passed them by without giving them much thought.  But then last week I had a pathetic Eureka! moment when I realized that blondies are -- and brace yourself for this -- brownies without chocolate.  Get it?  Blondies?  What a shocking revelation.  I like to think the concept was just so unexciting that my brain didn't want to make the connection.  Because what's a brownie without the chocolate?  Pointless, that's what.

But I figured there was no harm in trying them anyhow.  I posted on twitter asking for favourite recipes, and searched some of my best resources.  I had some great responses and now have a few recipes to try in the future.
Since I recently discovered Snickerdoodles, I knew they might be able to win me over to the blondie side. So I settled on making Snickerdoodle blondies. 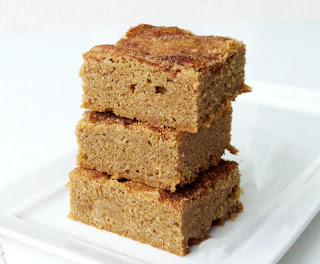 I admit: they won me over.  They're dense and chewy with the perfect hint of spice.  They're basically like eating a giant, thick Snickerdoodle, which is fine by my standards.  And although I didn't have any nutmeg (a problem that will never happen again), they were delicious without. 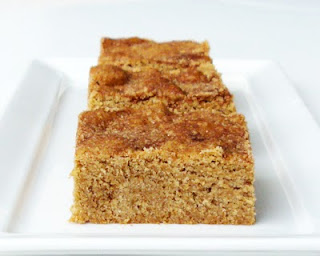 Snickerdoodle Blondie Recipe
Adapted from The Crepes of Wrath
2 2/3 cups all-purpose flour2 teaspoons baking powder1 teaspoon cinnamon1/4 teaspoon grated or ground nutmeg1 teaspoon salt2 cups packed brown sugar1 cup butter, room temperature2 eggs, at room temperature1 tablespoon vanilla extract2 tablespoons granulated sugar2 teaspoons cinnamona pinch nutmeg
1. Preheat oven to 350 degrees F. Lightly grease and/or line a 9×13 inch pan. Combine the flour, baking powder, cinnamon, nutmeg and salt and set aside.2. In large bowl, beat together butter and brown sugar for 3-5 minutes. Add in the eggs one at a time, then the vanilla, and beat until smooth.3. Stir in the flour mixture until well blended. Spread evenly in prepared pan (mixture will be somewhat cookiebatter-ish, so it’s best to spread it out with a greased spatula or your hands). Combine the granulated sugar, cinnamon, and nutmeg in a little bowl. Evenly sprinkle cinnamon sugar mixture over the top of the batter.4. Bake 25-30 minutes or until surface springs back when gently pressed. Cool before cutting. Makes 20-24 bars.