There have been a few things I've loved so far this week. 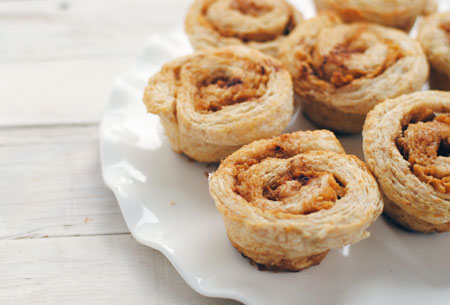 And with days marred by so much tragedy, it's important to recognize the things that make us smile. This week it all started with the verbal smackdown Trudy Campbell gave the somehow-always-detestable Pete on Mad Men, which was quickly followed by the sun actually existing in Vancouver for a few days, and, finally, these no yeast apple cinnamon rolls.

A healthier take on cinnamon buns, these rustic roll ups taste a little like apple pie hugged by dough. The bottoms become sort of caramelly, the centres soft and flavourful. They passed the three person test (loved by the man, the boy, and me) and were gone within a few hours - a sign they need to be in my home more often and yours, too, I'm pretty sure.

I left them without icing because they were damn good on their own, and I didn't want the sugar content any higher. But no one is stopping you from drizzling on a little bit, if that's what you're into - you just have to let me know how it turns out. 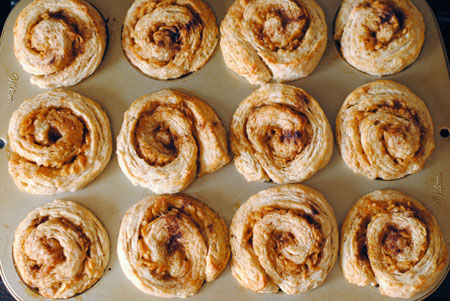 In a large bowl, stir together the flour, sugar, baking powder, baking soda, and salt.  Using a pastry blender or 2 knifes (or your hands, whatever works), cut in butter until mixture resembles coarse crumbs.  Stir in yogurt to make a soft, slightly sticky dough.

Combine the sugar and cinnamon for the filling.  Brush dough with the melted butter, and sprinkle the sugar mixture evenly on top, leaving about 2 cm border.  Sprinkle the chopped/grated apples over top. Brush border with water, and roll the dough as if it were a jelly roll.

Using a serrated knife, cut into 14 or so slices (depending on how thick you want them.  I start by halving the dough, then halving the halves, and so on until the rolls are about 3-4cm thick).

Place into greased muffin tins, and brush with the milk.  Bake for 15-20 minutes, or until golden brown.