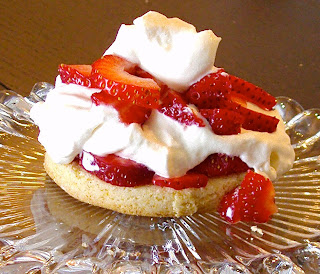 I found solace in a place called Barbara-Jo's Books to Cooks yesterday afternoon, over by Granville Island.  It's a dangerous place to be -- so many cookbooks, and only so many hours they are open during the day.  I managed to cap myself off at two books, though: Chocolate & Vanilla by Gale Gand, and Gluten-Free Baking by Rebecca Reilly.  The latter was purchased because my boyfriend has gluten issues, and it always makes me a bit sad when he doesn't eat some of the baking I make.  Mainly because I'm left to eat it all.  And eat it all, I do.

Admittedly, strawberry shortcake isn't really my type of dessert.  I prefer richer, chocolately fare.  But this was to win him over to that dark side, however gradual the transition will be, so a fresh, fruit-filled shortcake was the first offering.  I took my new book to Choices, armed with a disturbing sense of earnestness, and picked out all the rice/potato/tapioca flours and starches I'd need.  It's a whole new world.  An expensive new world, too.  Anyone know a good place to buy non-gluteny flours in Vancouver? 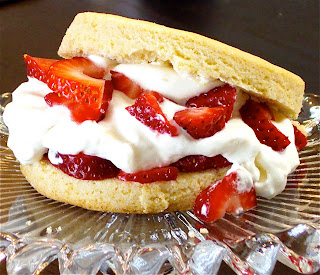 I was a bit scared of the gluten-freeness, but was happy and only mildly surprised when the recipe actually worked.  In terms of taste, it was good, but it was more of a traditional, heavier biscuit and we were both hoping for something a bit lighter.  But it was still delicious, if only partly because it was something we could both enjoy without one of us suffering.

Expect more gluten-free goodies as I try out other recipes from her book!
Posted by Leanne at 11:39 AM